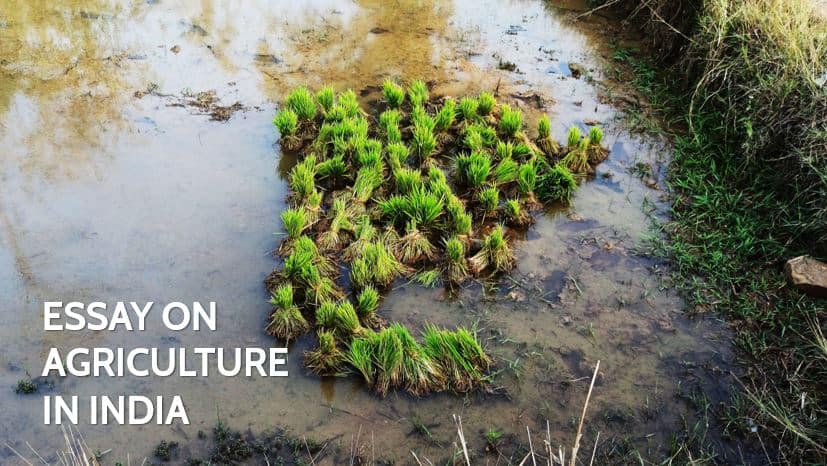 In this article, we have published an essay on agriculture in India. Here you will also read about its history, advantages, and adverse-effects for us.

Agriculture is one of the key segments of the Indian economy. It has been in the country for thousands of years. It has evolved over the years, and the use of new techniques and equipment has replaced almost all traditional farming methods.

Also, in India, some small farmers still use old conventional farming methods because they do not have the resources to use modern techniques. Furthermore, it is the only region that has contributed not only to its development but also to the rest of the country.

Development of the Indian agricultural sector

India is very dependent on agriculture. Further, agriculture is not a means of livelihood but a way of life in India. Also, the Government is continually making efforts to develop the area as the entire country depends on agriculture for food.

For thousands of years, we have been practising agriculture, but still, it has not evolved for a long time. Also, after independence, we import food grains from other countries to meet our demand. But, after the Green Revolution, we became self-sufficient and began to export our surplus to other countries.

Also, as before, we rely almost entirely on monsoon for the cultivation of food grains, but now we have built dams, canals, tubing wells, and pump-sets. Besides, we now have good fertilizers, pesticides, and seeds that help us grow more food than we have in the past.

As technology evolves, we get –

Also, our agricultural sector has grown stronger than in many countries, and we are the largest exporter of many food grains.

History of Indian Agriculture after Independence

After independence, Indian made immense progress in food security programs. The population of Indian has tripled, and so has the food grain production. Indian had to rely on imports before 1960 to meet the domestic requirements.

However, after the severe drought in 1965 and 1966, India was convinced to reform its agriculture policy, which ushered India into the Green Revolution. The Green Revolution led to making Punjab the country’s breadbasket. Initially, states like Uttar Pradesh, Haryana and Punjab saw an increase in production as the program was concentrated on the irrigated areas of the states. The government officials and farmers worked together and focused on productivity and transfer of knowledge.

The Green Revolution program increase production, which ensured India become self-sufficient. By 2000 Indian farmers adopted varieties that yielded six tons of wheat per hectare. Dams were built and are used for developing the irrigation projects, which has also provided the source of clean drinking water.

The minimum support price guarantee given by the Government for crops like sugarcane and rice has led to the encouragement of groundwater mining, which has led to groundwater depletion.

The importance of agriculture in India

It is not inappropriate to say that the food we eat is the gift of agricultural activity and that it is the Indian farmers who sweat to provide us with this food.

Deforestation means that the trees are permanently removed from the forest to provide space for them. This may include clearing land for agriculture or grazing or using timber for fuel, construction, or construction.

The use of genetic engineering and the concept of genetically modified crops have brought many benefits to the agricultural world. By making crops resistant to diseases and pests, fewer chemical pesticides need to be used to combat diseases and pests.

The most frequent sources of water for irrigation are rivers, reservoirs and lakes, and groundwater. The use of controlled water to the plants at intervals requiring irrigation helps to increase agricultural crops, landslides, and reforestation of disturbed soils in dry areas and low rainfall during the average rainfall.

Pollution means that the substance must not be above the background or concentrated. Pollution can lead to adverse biological effects on habitats. Some farmers in India burn their paddy fields after cutting rice. Due to which most of the nearest towns and cities face air pollution.

6. Soil degradation and land use issues

Loss of fertile land increases the impact of soil erosion. This has increased pollution and sedimentation in rivers and streams, causing fish and other species of erosion by blocking these waterways. And even degraded lands can often hold water, leading to flooding.

Agricultural waste is the waste generated by various agricultural activities. This includes compost and other waste from farms, hens houses, and slaughterhouses; crop litter; fertilizer part- away from the fields; Pesticides that enter the water, air or soil; and salt and silt from the fields.

Due to the local infrastructure, local resources, soil quality, micro-climates, each state yields different agriculture productivity. There is a high scope to increase the productivity of the Indian farmers by improving the irrigation infrastructure, cold storage, hygienic food packaging, etc. so that the local farmers can improve their output and income.