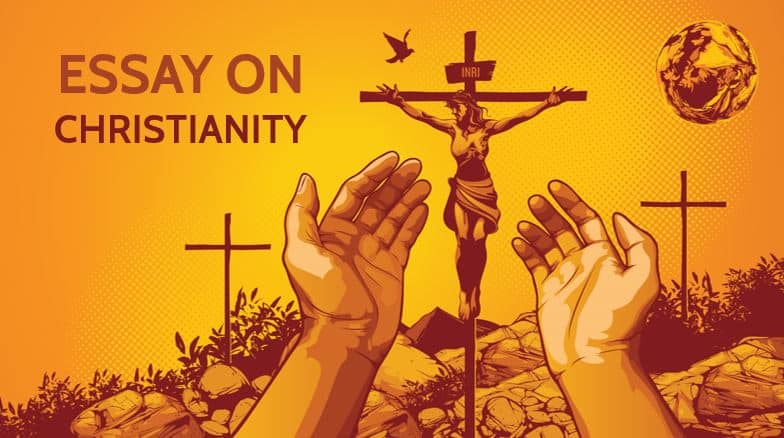 In this article, we have published an Essay on Christianity in 1000+ Words. It includes History, Beliefs, Jesus Christ Teachings, and 10 lines on Christianity.

So, start reading Essay on Christianity below…

Christianity is known as the largest religion in the world. Over 2 billion people in the world are followers of Christianity, who are classified under 34000 denominations.

Initially, Christianity strengthened from Judaism because Jesus Christ and his Twelve disciples were Jews. This religion’s principle revolves around the life, death, and resurrection of Jesus Christ. The religion is monotheistic as Christians believe in only one God.

The Holy Bible is believed to be the word of God by Christians. Although it is taken literally by some Christians, it is considered being derived from the Holy Spirit.

In the 4th century, Constantine formed the first council of Nicea in the name of Nicene Creed, and thus Christianity legalized. The Church of England, Eastern Orthodox Church, and the Roman Catholic Church still use this Creed.

The Roman Catholic accepted Christianity as it’s the official religion in A.D 380, and consequently, Jesus Christ was declared both fully man and fully God. In the following years, the books of the Bible were determined, and it was decided that Nicene Creed was the permanent doctrine to the Church at the Council of Rome.

According to the scripture, a young virgin, namely Mary, gave birth to Jesus in Bethlehem, a town located in the south of Jerusalem ( modern-day Palestine). Scripture says that the happening was a divine supernatural event with God impregnating Mary through the Holy Spirit.

Very little is in the record about Jesus’ childhood. His father Joseph was a carpenter. Initially, he grew up in Nazareth, where he and his family received continuous persecution from King Herod. Then he moved to Egypt.

Jesus was initially a Jew. As per the scholars, he wanted to reform Judaism and not to create a new religion.

Jesus took baptism when he was about 30 years old, by the prophet John the Baptist in the Jordan River. He started his public teachings after that.

Jesus traveled from place to place for around three years with his 12 disciples to do ministry to numerous people and performed miracles, which proved his divinity. He did many wonders, and some of the most extraordinary events were raising a dead person named Lazarus from his grave. He walked on water; he cured the blind, etc.

Jesus’ teachings were in parables, i.e. short stories with some spiritual hidden messages in Christianity.

Some major teachings of Jesus are mentioned below–

Festivals and Celebrations in Christianity

Around one-third of the world’s total population belongs to Christianity, and it has been for the last 100 years.

The major reason that Christianity is still growing is that the Church in these days is still as powerful as it ever had been. Participation in Church has been decreasing in Europe since the last few years, whereas it is increasing in the rest of the world exponentially.

For the first time during the seventh century, it was witnessed that, in the upcoming times, there will be more Christians outside Europe than that of Europe itself. It has been predicted that most Christians will be in Latin America and Africa in the 21st century, and around 20% of Christians will be non-Hispanic whites within 2050.

Christianity has played a significant role in constructing the world as it is that we know today. The Church inherited ultimate power and authority since centuries, whole over the world, and it still has in some places in some aspects.

The Bible has originated many laws we follow in Western society. It also shares the morals about the sense of wrong and right being inherited from the teachings of Jesus. The atheist groups also have protocols that are the same as those given by Jesus.

In this Christianity essay you have read various beliefs, teachings of Jesus, festivals celebrated by christian peoples and more. I hope you liked this informative Essay on Christianity. Thanks for reading.